Despite having used the Baldwin Library of Historical Children’s Literature at the University of Florida for the first time just a few weeks ago for a unit 1 author research project, this assignment was a whole new beast. Having to create an Omeka exhibit on a science related theme in children’s literature proved to be an interesting project in that the theme possibilities for this project seemed endless. The Baldwin Library has a plethora of science related books, and the topic is very broad. After much deliberation, the team was able to decide on the theme of natural disaster images; specifically looking deeper into how the depiction of this extreme weather has changed over time.

Due to major struggles with deciding on a topic that was the ideal mix of broad and narrow, the team decided that in order to come up with a topic that works for every member, hanging out normally and learning more about one another was necessary. What turned out to spark things for the team was when everyone found out that teammate Catherine Moore was an Earth and Atmospheric Sciences major. Moore went on to explain that while the introductory EAS classes can be slow and are not always taken very seriously, the upper level classes are really interesting and get rather specific. For example, she was very excited to take a class focusing on volcanoes. After coming to the conclusion that the Earth and Atmospheric Sciences major was not as boring as the introductory classes made it seem, the team came to the realization that the topic for this project had to be natural disasters. It was decided that specifically pictures and illustrations of natural disasters would be the most ideal topic for the group because it would allow for a very broad topic to become relatively more narrow.

With this specific focus, the main idea that the team wanted to discover and learn more about was how the education of natural disasters has changed over the years. In order to delve into this concept, the pictures found were divided into three different categories. These categories included early children’s fiction literature, early children’s textbooks/nonfiction, and present day children’s literature. These divisions help to break down the illustrations and pictures and help the team find common themes across each group. From this, conclusions were able to be drawn on the teachings of natural disasters and weather phenomena and ultimately how it has evolved throughout the years.

Looking deeper into the early children’s fiction literature category, the team noticed that the pictures were primarily black and white illustrations that were intricate in detail and used to educate young children in what these natural disasters really are. They are a useful tool in explaining the truths of extreme weather, and some even used fun imagery to capture young children’s attention. For example, the picture below is from Oliver Herford’s book of fables “The Bashful Earthquake.” In this drawing, an animated globe splitting in half is stumbling and crushing into buildings. This is a humorous depiction of what an earthquake does to city’s infrastructure, but also shows how tectonic plates are shifting on the Earth’s surface. 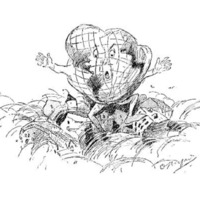 While this drawing is rather intricate and clearly fake, it is easy to gather information regarding what happens during an earthquake.

The next category the group explored was Early Children’s Textbooks/Nonfiction. The images in these books were illustrations as well as diagrams. The illustrations helped to portray what these natural disasters looked like in real life whereas the diagrams helped to explain more of the why rather than the what. An example of an early diagram can be viewed in “First Lessons of Geology” by author Miss D. W. Gooding. In the diagram below, one can see the sections of the earth’s crust as well as part of a volcanic eruption. By drawing this out, Gooding is able to display to the children how lava becomes pressurized underneath the crust, then when the pressure is released, how a volcanic eruption occurs. The drawing is simple, easy to look at, and perfect for a child to draw conclusions and learn from. 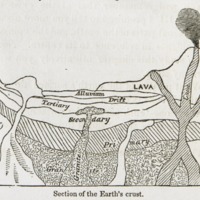 Finally, the last category which we explored was Present Day Children’s Literature. With this group, series such as the “The Magic Treehouse” and “I Survived…” were explored. These books contained pictures that were colorful and occasionally photoshopped. For example, in  “I Survived the Joplin Tornado, 2011” by Lauren Tarshis, the cover is vibrant as well as clearly edited. This can be seen in how objects such as the water tower are flying around in the air in the top left of the picture or how a car is getting caught in the powerline in the top right of this cover photo. 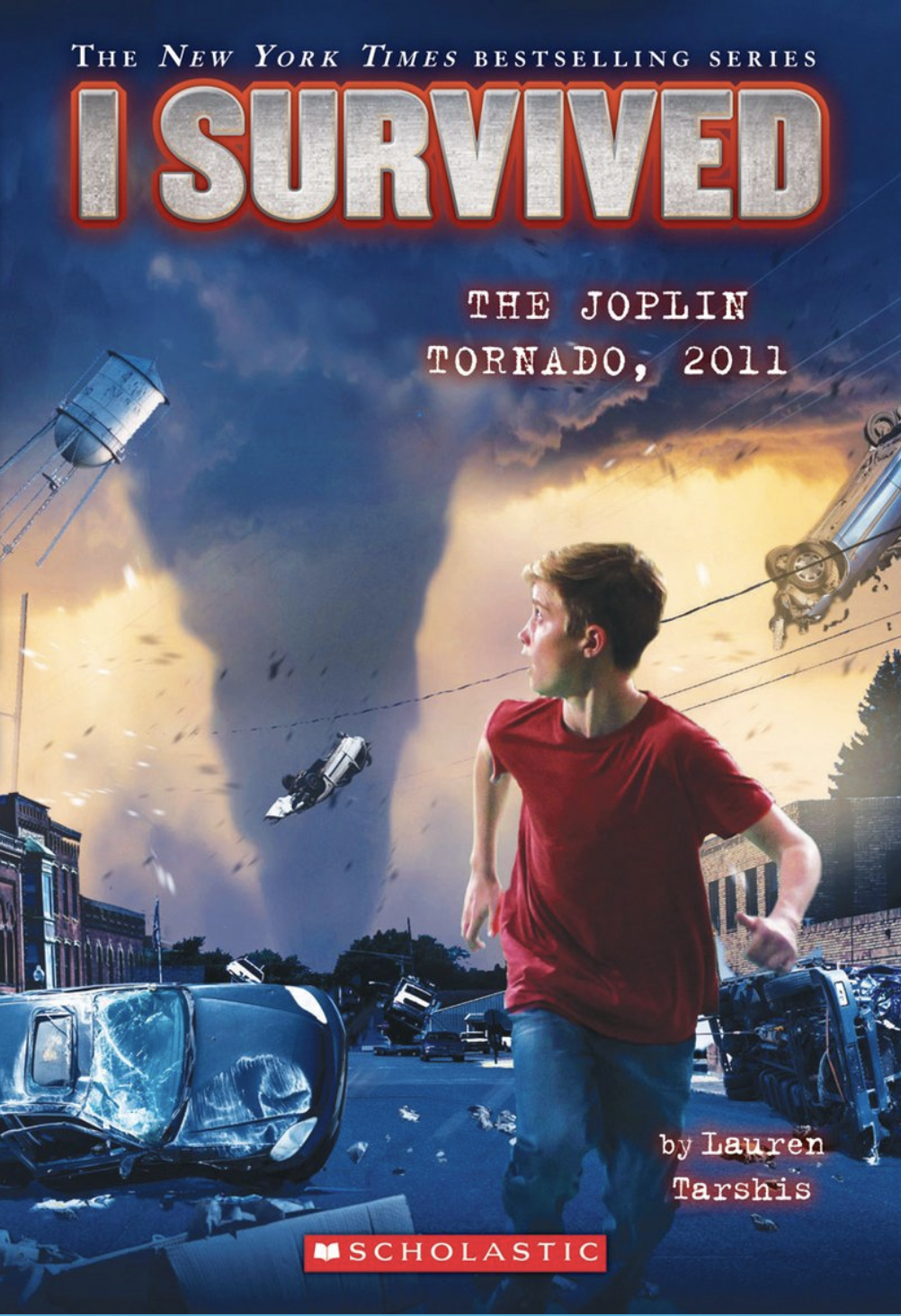 The pictures in this section also helped point to the idea that safety in one of these situations is extremely important. By putting people in the pictures, the threat of being caught in a natural disaster is more real and hence taken as a more serious hazard. Due to editing softwares and other technological advances, it should be noted that more modern day pictures are more imaginative and exaggerated.

In conclusion, these pictures of natural disasters and weather phenomena have transformed from basic education concerning what these disasters are to teaching how one should protect themselves if they were stuck in such a situation. In other terms there was a shift from the “what” are natural disasters to the “why” natural disasters occur and “how” to stay safe during this extreme weather. The usage of color has made natural disasters seem more threatening and has changed the connotation shift from just something that occurs to something to be afraid of. This project helped the group become more aware of how literature has changed throughout the years specifically in regard to the teachings of science. This is something that is important to realize because how and what children are taught ultimately shapes them into the adults they become.  Teaching one generation how natural disasters work influenced how they taught the next generation to protect themselves, which is a fascinating shift to observe.